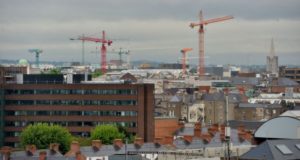 Edition 102 of BRegs Weekly is

Consumer groups and opposition politicians have been critical of privately run and operated registers of competence established under building control procedures BC(A)R SI.9. The perception is that there is a strong conflict of interest when private representative membership organisations are tasked with policing their own members, and that there are little in the way of actual consumer protections as a result.

Notwithstanding these issues, Minister Simon Coveney has reaffirmed his commitment to see the Construction Industry Register Ireland put on a statutory footing in the coming months.  This is a very significant change for the construction industry and means that all builders and sub-contractors will have to be vetted by CIRI/ CIF and pay an annual charge of €600. There are currently 30+ categories of registration (e.g. house builder, plasterer, civil engineering contractor).  The Construction Industry Register Ireland (CIRI) was launched by the CIF three years ago with the promise that it would “try to distinguish legitimate construction companies/ sole traders from those who have given the industry a bad name”– see link. Then Minister Phil Hogan, said that CIRI would be a “critically important steps towards restoring public confidence in the construction industry”.

Housing and homeless issues figure prominently in the media again this week. The continued lack of focus by policy makers on affordable housing and heavy reliance on private sector delivery of social housing feature. In 2016 just 37 Part V social homes were delivered nationwide. Despite the fact that “There were 70 construction cranes visible over the centre of Dublin on April 1st from the seventh floor of The Irish Times building on Tara Street.”.. just 2 are active on residential building. Housing problems are set to continue for some time.