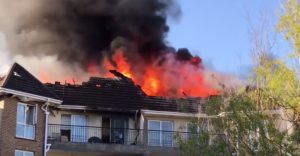 Edition 107 of BRegs Weekly is out now.

Six fire engines were deployed to Dublin 15 last week by Dublin Fire Brigade to tackle a blaze at an apartment complex that left dozens of residents homeless (read story here). There were no injuries but the fire at Verdemont estate in Coolmine caused extensive damage. A number of residents were provided with temporary overnight accommodation at a respite centre in Cabra. The Department of Social Protection put emergency procedures in place for Verdemont residents the following morning to support those affected. Local TD Joan Burton (Lab) extended sympathies to the residents and called for an enquiry into the blaze. “There will have to be a detailed inquiry into the fire and how it spread so quickly and destroyed and damaged so many apartments and homes. The Minister will have to initiate this as quickly as possible and review fire safety standards and their enforcement in respect of domestic dwellings.”

The mounting crisis of ‘celtic tiger’ defective buildings featured in the Independent (see article here). Some high-profile developments have made the headlines, but many in the construction sector believe these are just the tip of the iceberg. Fortunately to date, there have been no major fire disasters in shoddy Celtic Tiger era apartment blocks. However when a row of six terraced timber-framed houses at Millfield Manor in Newbridge, Co Kildare went up in flames in just 30 minutes in April 2015, a warning was sounded about what could happen.  After the fire former Minister of the Environment Alan Kelly (Lab) commissioned a detailed inquiry and fire safety report. He said at the time: “I am acutely aware of the stressful and distressing situation facing homeowners, such as those in Millfield Estate in Newbridge, who simply do not know whether the home they live in is safe and secure from the risk of fire.” Former Minister Kelly commissioned a report which was completed and was due to be published in January 2016, but the Department of Housing under Simon Coveney has withheld publication.

The Department kept unpublished another damning report into fire safety in the Holywell estate in Swords, Co Dublin for five years until the Sunday Business Post obtained a copy and went public. However, the Department was made aware of serious concerns of the Local Authority into fire safety in the estate as far back as 2007 “Our inspectors have very serious concerns about the specifications and quality of workmanship to the premesis. These matters go beyond the question of completion and raise issues of the basic acceptability of the property”. The Department did not inform residents of serious fire issues that they aware of for years (see article here).

Elsewhere Minister for Housing Simon Coveney has announced a public consultation on his intention to review Part L of the Building Regulations (Conservation of Fuel and Energy) and to amend the accompanying Technical Guidance Document L. From the Dept: “The proposed amendments have the overall objective of improving the energy and carbon performance of new buildings other than dwellings and to transpose the EU requirement for nearly zero energy buildings and major renovations, without imposing a disproportionate burden on industry in terms of bureaucracy or costs.” Submissions and comments on the review should be submitted by email to buildingstandards@housing.gov.ie no later than 5:30 p.m. on Friday 26th May 2017.