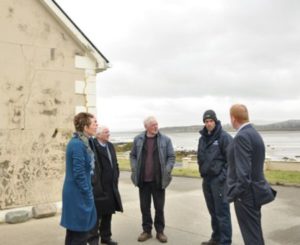 Pictured: Former Minister of State Paudie Coffey in Inishowen in 2015

A number of damning official reports into defective buildings continue to remain unpublished by the Department of Housing under Minister Simon Coveney. In a recent Independent article “Cracking up: the legacy of Celtic Tiger Ireland” the issue of homes affected by pyrite and mica in Donegal and Mayo was noted “In the most extreme cases, such as the hundreds of houses built with defective building blocks in Donegal, homes are literally crumbling”.

Glacial government response to this problem and continued procrastination by officials in publishing an official report  was highlighted in the Seanad on 23rd May 2017. Pádraig MacLochlainn (Sinn Fein) said “This is a failure of the State, of building control legislation and to ensure compression tests guaranteed that the blockwork, the core product in the family home in Ireland, was sound. It was an utter failure of State regulation right through. These families have been failed utterly.” Here is an extract of the Seanad exchange:

Some 18 months ago the Government of the day, which was led by the Minister of State’s party, announced the establishment of an expert panel. This panel was to examine the crisis facing a large number of families in Donegal and Mayo in respect of the failure of the concrete blockwork in their homes as a result of the presence of mica, or pyrite as is the case in Mayo. It was to report by 31 May 2016. Here we are a full year after that deadline and that report has still not been published. The families who are crying out for help and assistance still have not received any…

This is a failure of the State, of building control legislation and to ensure compression tests guaranteed that the blockwork, the core product in the family home in Ireland, was sound. It was an utter failure of State regulation right through. These families have been failed utterly… I have met people, grown men, in tears in their own kitchens… They are devastated because of the failure of this State to protect their interests and to ensure that those blocks were sound and that the building controls standards were enforced properly. Now they are left with crumbling homes. I cannot urge the Minister of State enough that this needs to be sorted out urgently. People cannot wait any longer…

How can it take the best part of five months to legally proof a document? I understand this report was concluded at the beginning of this year. It is not acceptable that five months have been spent legally proofing it. A year has passed since this document was supposed to be published. Families have been faced with impossible choices during that time. This is a real crisis…

“I understand the Senator’s frustration. As I have said in the Dáil Chamber, it is about time this report was given to the relevant people. The reasons these people should get some redress need to come out now. I will relay all the messages outlined by the Senator to the Minister. A great deal of consultation was done and there were many meetings as part of the in-depth process of identifying the needs of home owners and seeing what structural damage had been caused to their homes. All of this took some time. I agree with the Senator that it is time to get on with this process so that the report can be launched. I understand the Minister intends to have the report finished within a number of weeks. This could mean four weeks or it could mean six weeks. I will relay the Senator’s message to the Minister and make sure he gets an answer.”

The Department of Housing (environment) withheld a damning report into fire safety in the Holywell estate in Swords, Co Dublin for five years until the Sunday Business Post obtained a copy and went public. The Department was made aware of serious concerns of the Local Authority into fire safety in the estate as far back as 2007 did not inform residents (see article here).

Former Minister Alan Kelly commissioned a report into a potentially fatal fire in Millfield Manor in Newbridge, Co Kildare  when a row of six terraced hoes went up in flames in just 30 minutes in April 2015. This report was completed later that year and was due to be published in January 2016. Department of Housing under Simon Coveney continues to withhold publication (see article here).

Property firm to contribute €1m to pyrite board | Irish Examiner