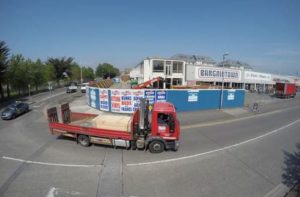 At a Dublin City Council (DCC) meeting yesterday, Councillor John Lyons (People Before Profit Alliance) posted on social media that DCC had not consulted councillors regarding homeless ‘hub’ accommodation and that elected representatives had not seen any cost-benefit analysis for any of the emergency schemes.  His motion to ‘cease immediately with this flawed and shameful plan of placing families into industrial estate locations such as the former Bargaintown furniture store… and seek instead solutions to the homelessness crisis, such as acquisitions and a programme of social housing…” was ruled out of order.

In 2015 Architect Vivian Cummins examined the implications of Building Control Regulations introduced in 2014 BCAR SI9 on 22 ‘Rapid’ build homes in Poppintree, Ballymun. His analysis was prescient as the completion of the ‘rapid’ units took 6 months and not 6 weeks as officials predicted, with families moved in May 2016. Vivian Cummins said “Anyone at the frontline of Ireland’s homelessness crisis knows that there is only one crucial factor to be considered in the provision of modular homes and that is speed of delivery. The parents trying to provide meals from a wardrobe in a hotel room, to the 1,500 children currently homeless in Ireland, are not concerned about Building Energy Ratings or timber versus carpet floor coverings. They just want their own roof over their heads in time for Christmas or indeed anytime soon.”

The same ‘red tape’ may affect the Minister’s planned change of use of various different buildings into emergency Homeless ‘Hubs’, temporary emergency accommodation for homeless families. BCAR SI9 procedures affect all change of use applications irrespective of whether any significant internal modifications are needed or not, and there is no exemptions for emergency or temporary buildings under SI9.

Dublin City Council and the Department of the Housing have quite a challenge to deliver accommodation to +7,500 men, women and children by the 1st July.

It is assumed that these projects will be fast-tracked through the planning process by using Section 179 (6) (b) of the Planning & Development Act 2000*- bypassing the normal planning process as the Local Authority deems the situation to be an emergency. The council can skip taking any submissions or observations from the public on the proposal, a process that would normally take a minimum of six weeks.

Legislation introduced only on 1st September 2015 (SI.365, brought Local Authorities into the BC(A)R SI.9 net they now have to comply with SI9 in full. The problems associated with SI.9 in trying to deliver housing quickly and economically have been seen elsewhere.

The Building Control Regulations require the serving of a Commencement Notice 14-28 days to the Building Control management System (BCMS) before starting on site and a Completion Certificate, at the earliest, 3-5 weeks before completion. It is unclear who will be the ‘Assigned Certifier’ and ‘Building Owner’ for the purposes of submitting the required Commencement Notice and Completion Certificate and undertaking the responsibility for same.

The above means some of the following programme issues for a completion by July based on tenders submitted say by the end of last month (wed 31st May). Allow a one week assessment of tenders with the successful bidder notified on 7th June:

Have the implications of the Building Control Regulations BC(A)R SI.9 created a scenario where the Assigned Certifier will have to confirm all of his inspections and everyone else’s before the building actually starts in order to meet the completion deadline?

Helpful Links: What are the Building Control rules for converting buildings?

The beginners guide:  Practical posts 3: Change of Use – FDI and offices

The expert guide: O’Cofaigh: fit-outs that are exempt from SI.9

Housing crisis rumbles on… the shape of things to come?

Getting Our Housing in Order | Vivian Cummins