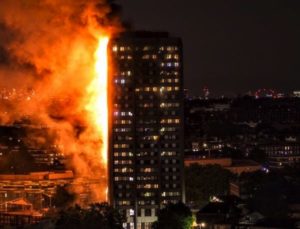 Ireland ‘following the English model of building regulation – which is inadequate’

The possibility of a Grenfell Tower-type fire in Ireland exists, according to a fire safety expert, but a representative of fire-fighters says the height of buildings currently does not pose a problem for the fire service.

Niall Walsh of CJ Walsh, an architectural and sustainable design firm, said he feared Ireland was following the building and regulatory path taken in the UK – which appears to have contributed to the Grenfell Tower tragedy.

Rainscreen cladding on the London tower was, according to Rydon Construction, put there with the aim of “improving thermal insulation and modernising the exterior of the building”. The company finished refurbishing the building last summer.

Mr Walsh said in an interview that Ireland was “following the English model of building regulation – and that model is inadequate”.

The model was one that eschewed actual inspection of buildings in favour of paper-based checks, he said.

He said there was a need for “independent inspection of buildings”, similar to the regime that was in place in Ireland up until the early 1990s.

As regards building materials and construction methods, which appear to have played a role in the London blaze, Mr Walsh said while it was important not to rush to judgment, “there is definitely a problem with external cladding”.

Such cladding has become popular in recent years for buildings of all sizes – including two-storey residential homes.

External cladding has previously been a factor in the rapid spread of fire in incidents in Australia, the Middle East and Chechnya, Mr Walsh said.

Spread could be rapid

If the material used in external cladding was flammable and fire from an interior passed to the exterior, the spread thereafter could be rapid.

“There’s definitely a question with the cladding. There’s also a question as to how the fire spread so quickly internally because there was only one fire evacuation staircase, from reports – and that was very quickly smoke clogged,” said Mr Walsh.

Other questions any inquiry was likely to focus on included the fire alarm system, if one existed, and the “stay in place” standard advice to people in residential buildings – that is, return to your apartment, close the door while the fire is fought, and wait for assistance.

“It is criminal to advise people to go back into their apartment and wait. These are not safe places any more,” said Mr Walsh.

Ross MacCobb, chairman of the Irish Fire and Emergency Services Association, agreed that external insulation was a cause of concern.

“It’s made of polyfoam, or a variety of that, all the way to rockwool, which won’t ignite although it will burn,” said Mr MacCobb.

Dublin fire-fighters currently had access to turntables that had ladders capable of reaching 32 metres into the air, which, when erected at an angle, gave fire-fighters an elevated reach of some 28 metres, he said.

This would be sufficient for buildings of up to 10 storeys, said Mr MacCobb. He had concerns that planning regulations might soon allow for buildings of a height that would put them out of reach of the fire brigade.

Spending cuts may have contributed to London fire – Corbyn

Other articles of interest: