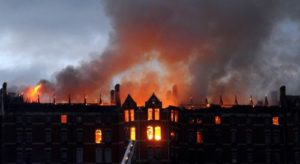 (Fire at Our Lady’s Hospital site in Shanakiel, Co Cork this week)

Edition 113 of BRegs Weekly is out now.

In th Irish Mirror’s story “Ireland needs watchdog to crack down on buildings that don’t meet fire safety standards” Green Party’s deputy leader Catherine Martin has demanded an independent watchdog to crack down on defective buildings that don’t meet mandatory safety standards. She said that the government must urgently extend fire safety checks beyond high rise towers. Deputy Martin’s statements come  as it was revealed that Cork County Hall contains the same cladding seen at Grenfell Tower in London, the blaze that left 79 people dead earlier this month. Ms Martin said “It’s extremely worrying that the flammable cladding, believed to have contributed to the spread of the awful fire in Grenfell Tower, was installed here in Ireland. We need to know how this cladding ended up being installed, and if it was used elsewhere… We have seen time and time again the need for a powerful independent regulator for the construction industry. This is another example. The Government need to get serious about this issue.” Last week Ms Martin passed a motion in the Dàil calling for tougher building standards and stronger regulations to protect home owners.

In “Grenfell fire raises fears over cladding on Irish incinerator”, The Times reported that similar concerns have been raised about the safety of the material on the outside a building near Ringsend. Ciarán Cuffe, a Green Party councillor, called on Dublin Waste to Energy, the public-private partnership which runs the incinerator, to provide assurance to the local community that the material was not flammable. “It is one of the largest aluminium-clad buildings in the country. It is a matter of concern and we would like to get reassurance that there is not a problem and that the plant is safe to operate.” Dick Brady, Dublin city council’s assistant chief executive, said. said  “It is obviously a question we have asked ourselves and the detail has been requested. We are awaiting a reply”. Dublin Waste to Energy, a joint venture between the four local authorities in the capital and Covanta, a US waste company, did not respond to a request for comment about the safety of the aluminium exterior.

Joe.ie reported that seven Dublin apartment buildings have been issued with fire safety notices this year. It’s understood that the Dublin Fire Brigade issued the warnings to the Dublin apartments this year after marking them as “potentially dangerous”. Dublin Fire Brigade has an ongoing campaign of inspection to check buildings of public resort for compliance with the Ease of Escape Regulations. These inspections can occur at any time during normal operating hours of public premises. In Ireland, under the Fire Services Act, 1981 a fire authority may serve on the owner or occupier of any building which appears to the authority to be a potentially dangerous building a fire safety notice for various reasons (read more about them here).

The glacial pace of official response to the ongoing housing shortage was highlighted in a number of media outlets.  The Times in “Housing shortage and income tax levels ‘will deter investors’” reported the IDA has warned that a lack of housing and high personal taxes could scupper future overseas investment in Ireland. Martin Shanahan, the chief executive of IDA Ireland, said that companies were “concerned about two issues which they believe may impact on their ability to attract and retain talent and those two issues are housing availability and costs and personal taxation”.

Elsewhere in “Bedsits are back to the future from the Housing Minister, says Inner City Helping Homeless” Inner City Helping Homeless CEO, Anthony Flynn was critical of suggestions by the Department of Housing for a return to bedsit accommodation as a measure to alleviate the current housing shortage. He said “The Department of Environment thought bedsits were such a poor way of housing people that they outlawed them in 2013… For the government and its officials to abandon standards of housing and the protection of tenants, leaving them at the mercy of the ‘Bedsit’ landlords, shows an astonishing lack of understanding of the brief they hold… The minister would be better served if he widened his circle and invited other suggestions from groups who favour a modern approach to alleviating homelessness and housing issues”.