The long awaited Department of Housing report into the Millfield Manor in Newbridge, Co Kildare fire in March 2015, where 6 homes burnt down in less than a half an hour, has been further delayed.  A recent Freedom of Information request requesting the report, submitted by Eoin O’Broin TD (SF) was refused.  The request related to two documents, a 28 page case study on Millfield Manor and a second 23 page report “Framework for Enhancing Fire Safety in Dwellings where Concerns Arise”, a document intended to report on broader measures  and give recommendations for other similar defective schemes.

The grounds for the refusal were that the reports “contain information relating to the Deliberative process of the Department” and consequently the “release of the record is considered contrary to the public interest at this point in time”. The refusal is signed by David Hannigan, Assistant Principal, Housing Advisors and Building Standards.

The FOI refusal is below: 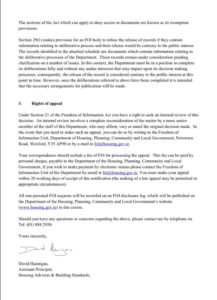 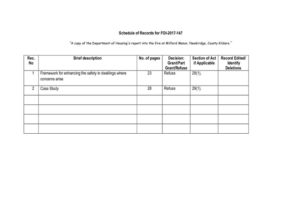