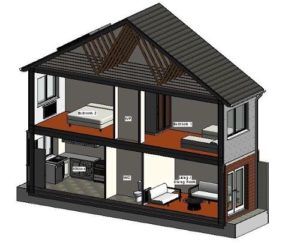 In the Irish Times article “Government’s ‘rapid-build’ schedule in realms of fantasy Irish Times” from 1st August 2017, Olivia Kelly reports on the slow pace of the Department of Housing’s ‘Rapid’ housing action plan initiative to tackle the homeless crisis.  The ‘Rapid’ initiative was analysed in detail in a Broadsheet.ie article back in April 2016 (see article “Rapid Answers”).  Just 22 so-called ‘Rapid’ prefab homes have been completed to date.  Extract from Olivia Kelly article to follow:

In a fit of excitement a year ago the Government launched its Rebuilding Ireland plan to sort out the housing and homelessness crisis, and deliver 47,000 social homes by 2021.

From day one this was clearly a fantasy…

The then minister for the environment, Alan Kelly, announced 500 modular houses would be provided as emergency housing for homeless families, with 22 to be in place before Christmas [2015] at a site in Poppintree, Ballymun.

By the time Rebuilding Ireland was published a good year-and-a-half later, those 22 had been occupied for about two months, and no other modular homes had been finished…

Well, in addition to the 22, Dublin City Council had issued tenders for 130 houses at sites in Finglas, Darndale, Cherry Orchard and Drimnagh with a completion date of June 2016. However, it cancelled the tender in March 2016 because the response from the potential housing providers was that this deadline was unrealistic.

The council issued fresh tenders for each of the sites, with completion deadlines from October to December 2016. Work on these four sites began in October 2016.

At around this time the council tried to inject a bit of realism into the situation. Its executive manager, Tony Flynn, said there was “no point” in seeking to complete projects in a timescale which suppliers could not meet, and that it would be 2017 before the housing at the four sites was finished.

Simon Coveney, the minister for housing at the time, wasn’t having that talk, saying 320 rapid-build homes would be under construction or completed by the end of the year. They were not.

Today it remains the case that no other rapid-build estates have been completed outside Ballymun… The city council is nearing completion on the 130 houses, and hopes to have them done by the end of next month.

The other three Dublin local authorities, Dún Laoghaire, Fingal and South Dublin, currently have plans for a combined total of 170 rapid-build homes. Tenders have been issued for some of these houses, and a small number have builders on site, but most are not scheduled to be completed until next year.

The head of housing of Dublin City Council, Brendan Kenny, says the current turnaround time on modular housing is 17 months.

“I fully agree that’s not rapid, but a traditional build on a housing estate of the same size from going to tender to occupation is about three years.”… However, Mr Kenny said “there is no such thing as rapid procurement, and this is where the delays lie”… The council does, however, hope to reduce the timeframe for future projects… “We would hope we could get the whole process down to about nine months.”

Is ‘Rapid’ housing too little, too late (again)?

All you need to know about ‘modular’ housing | ‘Rapid Answers’ Broadsheet.ie