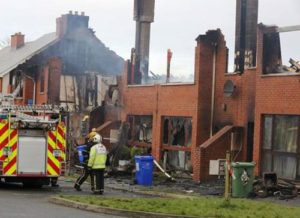 The following article “Delayed fire safety report an ‘insult’ to residents of estate that lost 6 homes in blaze” by Mick Clifford appeared in the Examiner on 26th August 2017 (full article here)- extract to follow:

There has been an overwhelmingly negative reaction to the publication of a long-awaited report into fire safety which had been expected to address specific concerns about construction methods during the boom years.

The Framework for Enhancing Fire Safety In Dwellings Where Concerns Arise was commissioned in September 2015 on foot of a devastating fire in Newbridge, Co Kildare, which gave rise to major concerns about timber frame construction.

The framework, which was published yesterday, was also to have included a report into the fire in Newbridge, but this has been redacted.

The 24-page document that was published largely restates existing regulations and offers advice on how to prevent fires. There is no mention of concerns about timber frame construction, which accounted for up to 30% of homes built between 2000 and 2008…

“The division of the terms of reference into two separated reports is a betrayal of the Newbridge estate…The advice contained in the published report is minimalist and a generic risk assessment and not the serious review that was promised to the Millfield residents.”..

Labour TD Alan Kelly, who commissioned the report when he was environment minister, told the Irish Examiner that the “report out today is simply not what I commissioned. It’s not in accordance with the terms of reference. The case study in relation to Newbridge was to be a key component. It was the example we were using as a case study to inform us about deficiencies in relation to timber frame houses across the country. This case study has not been made public and to me that is shocking and puts into question the report in its entity.”

Social Democrats councillor for Dublin Fingal Cian O’Callaghan, who has consistently raised concerns about fire safety issues in construction, said the report “spectacularly fails to address the very serious risks in homes faced with fire safety defects…The department sat on this report for months and now that it is finally released it turns out to be a damp squib in terms of addressing the very serious problems that many homeowners face in dwellings where fire risks have been identified…The report fails to even mention timber frame estates, let alone provide practical solutions for addressing this problem.”

Mystery surrounds the delay in publication for over a year. A number of different reasons were given by the Department of Housing for the delay, including that the report was being examined by the Attorney General…

NOTE: The Framework is available on the Department’s website HERE

Other posts of Interest