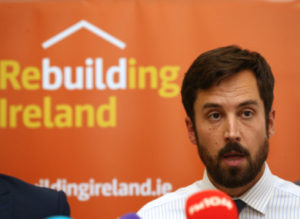 The following article “Millfield Manor homes fire report altered over State legal fears” by Jack Power in the Irish Times confirmed the full case study into the Millfield Manor fire in Kildare was not published following legal advice from the Attorney General, according to briefing notes prepared for Mr Murphy. Full article here, extract to follow:

A report providing guidelines for homes with fire-safety defects was altered by the Department of Housing, following advice from the Attorney General.
The first unpublished version of the report, obtained under the Freedom of Information Act, said homeowners could bring their property up to an “acceptable” standard of fire safety by following a series of guidelines set out in the review.
A review into fire-safety defects was launched in July 2015 by then minister for housing Alan Kelly, following a fire in the Millfield Manor estate, Newbridge, Co Kildare, where six homes burnt to the ground in under 30 minutes.
The review was to provide a report into the Kildare fire, and draw up a set of guidelines for homeowners whose properties were identified as not meeting fire-safety standards.
Prepared by fire-safety consultants Eamon O’Boyle and Associates, it was scheduled to be published at the end of January 2016.
The published version of the review, Framework for Enhancing Fire Safety in Dwellings, was released in August 2017 by the Department of Housing.
The report was delayed due to the changes made following legal advice from the Attorney General.
Series of precautions
The unpublished original report stated homeowners could “reduce the level of risk associated with the deficiencies to an acceptable level” by following a series of fire-safety precautions set out in the report.
It is understood the review was amended following legal advice from the State’s Attorney General over fears the term “acceptable level” of fire safety could leave the State liable in the case of a fire in a home with identified defects.
The published version of the report instead said the framework of safety guidelines “sets out a priority of action to reduce the level of risk associated with the deficiencies”.
The guidelines included closing doors, keeping fire hazards such as cigarettes away from furniture and testing fire alarms each week.

The original report said a risk assessment of a property would “enable professional advisers to provide specific fire-safety practices which will reduce fire risk in the interim”.
This line was altered to state practices which “could reduce fire risk” for homeowners.
The full case study into the Millfield Manor fire in Kildare was not published by the department following legal advice from the AG, according to briefing notes prepared for Minister for Housing Eoghan Murphy.
The case study was subsequently released under the Freedom of Information Act to Sinn Féin TD Eoin Ó Broin.

• NOTE: The Framework is available on the Department’s website HERE
• PDF: Framework for enhancing fire safety in dwellings