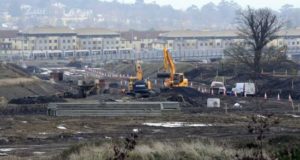 Edition 118 of BRegs Weekly is out now.

In “Housing minister Eoghan Murphy plays down risk of Grenfell-style fire” in the Sunday Times, the government has confirmed that there is no immediate risk of a repeat of the Grenfell Tower tragedy in Ireland. Local authorities were told in June to review fire safety at blocks of flats as a matter of urgency after the fire in London in which about 80 people died. Councils have identified 1,250 multi-storey residential buildings, 65% of which are in Dublin. Minister Eoghan Murphy said that Ireland did not have any Grenfell-type towers in terms of height or density but that the state had a “…duty of care when it comes to fire safety”.

In contrast, senior Government officials continue to withhold  a number of fire safety reports completed some time into areas of concern in the construction sector. The Dublin Inquirer reported into one such report in it’s article “FOI Chief Overrules Government Refusal to Release Fire-Safety Reports”. Earlier this year the Department of Education refused a freedom of information request to see a fire report into a number of possibly defective so-called ‘rapid build’ schools in Dublin. Under appeal the decision has been reversed and will see the report becoming available shortly- It should make very interesting reading.

A 30% increase in homelessness  since last year figured prominently in the media this week. In the Irish Times “First application made for Cherrywood development” Olivia Kelly reports on the first residential application made for the new town in South Dublin. Cherrywood is expected to be one of the largest beneficiaries of the Government’s Local Infrastructure Housing Activation Fund (LIHAF) with more than €15 million allocated for roads in the zone. However, the council is yet to agree terms with developers on the price of affordable housing in the zone. Under the terms of LIHAF, a commitment has to come from housing providers whose land would benefit from the infrastructure, to produce housing “…at affordable prices”. Local Green Party Councillor Ossian Smyth said figures submitted to the council by Neville & Sons in relation to social housing prices at their new development was unlikely to be affordable- “The figures show that the council would be paying more than €350,000 for an apartment for use for social housing; based on that it seems likely that a two-bedroom apartment on the market in the same development would cost €500,000.”